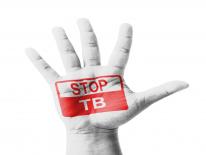 "TB"  short for tuberculosis, is a disease caused by a bacterium called Mycobacterium tuberculosis. The bacteria usually attacks the lungs but TB bacteria can attack any part of the body such as the kidney, spine, and brain. If not treated properly, TB disease can be fatal.

TB is spread through the air from one person to another. TB bacteria are put into the air when a person with active TB disease of the lungs or throat coughs, sneezes, speaks, or sings. People nearby may breathe in these bacteria and become infected.

TB is NOT spread by:

Not everyone infected with the TB bacteria becomes sick. As a result, two TB-related conditions exist: latent TB infection and active TB disease.

The Difference between Latent TB Infection and TB Disease

A Person with TB Disease:

Has symptoms that may include:

A Person with Latent TB Infection